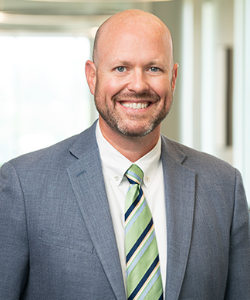 To view more patient reviews and ratings for Dr. Moss, please click below.

Born and raised in Indianapolis, Indiana, Joshua P. Moss, M.D., was always fascinated by tinkering with and fixing "things" of all kinds. Dr. Moss went on to attend the University of Notre Dame in Notre Dame, Indiana, where he graduated with highest honors and was commissioned as an ensign in the United States Navy through the NROTC program. It was at Notre Dame where Dr. Moss's love of fixing things and problem-solving met his passion for helping people, leading to his choice to pursue a career in medicine. Dr. Moss completed his medical degree at Vanderbilt University School of Medicine in Nashville, Tennessee, finding orthopaedic surgery to be a perfect fit for his personality and interests. He then completed his residency training in orthopaedic surgery at the University of North Carolina at Chapel Hill School of Medicine before continuing on to the Mary S. Stern hand, upper extremity, and microvascular fellowship at the University of Cincinnati.

With a passion for hand and upper extremity surgery, Dr. Moss is an expert in treating problems involving the entire upper extremity from the shoulder to the fingertips. His specific practice interests include arthroscopic and open surgery of the shoulder, elbow, and wrist. He has extensive experience with minimally invasive endoscopic nerve decompression techniques for carpal tunnel syndrome and cubital tunnel syndrome and is excited to offer these techniques to his patients. Dr. Moss also performs surgery for the full spectrum of upper extremity arthritis problems, tendon and nerve injuries, tennis and golfer’s elbow, and upper extremity and general orthopaedic trauma. He is also skilled in the treatment of Dupuytren’s contracture, including XIAFLEX® injections. Dr. Moss is a diplomate of the American Board of Orthopaedic Surgery with the additional ABOS Subspecialty Certificate in Orthopaedic Surgery of the Hand. He is also a fellow of the American Academy of Orthopaedic Surgeons and an active member of the American Society for Surgery of the Hand.

In 2008 following the completion of his fellowship, Dr. Moss began surgical practice as an active duty medical officer at Naval Hospital Camp Pendleton, just north of San Diego, California. Dr. Moss spent his entire military practice at Camp Pendleton, providing outstanding surgical care for thousands of active duty marines, sailors, soldiers, airmen, military dependents, and retirees. Dr. Moss’s notable experiences while in the military include a seven-month combat surgery deployment to Afghanistan in 2011 and temporary duty in Okinawa, Japan, in 2012. From 2013 through 2015, Dr. Moss served as the department head for orthopaedic surgery at Naval Hospital Camp Pendleton. In 2011, he was awarded the Army Commendation Medal for his performance during wartime deployment. In the summer of 2016 after fulfilling his obligated service time, Dr. Moss resigned his commission with an honorable discharge at the rank of Commander, United States Navy. He was awarded the Navy and Marine Corps Commendation Medal at this time as well.

Dr. Moss has been in practice with University Orthopaedic Surgeons since 2016. He has three beautiful children and two spoiled golden retrievers. He is thrilled to be back in Tennessee and part of the Knoxville community.