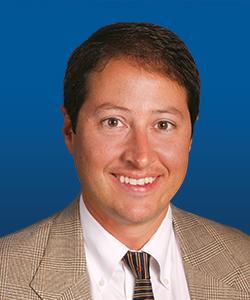 To view more patient reviews and ratings for Dr. McCollum, please click below.

Dr. McCollum specializes in adult reconstructive surgery, including total hip and total knee replacement. He practices at The University of Tennessee Medical Center and serves as the medical director for the Total Joint Program. He has a special interest in minimally invasive joint replacement techniques, such as anterior approach hip replacement, which is a muscle-sparing technique that is less invasive than alternative procedures and has a lower dislocated rate. Additionally, Dr. McCollum offers total knee replacement using state-of-the-art robotic-arm assisted technology, which enables him to perform surgery with added precision. Patients who undergo an anterior hip replacement or a robotic-assisted knee replacement can generally expect less postoperative pain and a faster recovery. The majority of patients are discharged home without the need for inpatient rehabilitation following their hospital stay.

A woodworker at heart, Dr. McCollum enjoys the mechanical aspect that carries over to his daily work in orthopaedics. For his young children, he personally constructed a playset rather than purchasing a kit with instructions, and this same passion for construction and precision carries over to his approach to reconstructive surgery.  He enjoys the different challenges that each day brings and being able to contribute to the overall well-being of his patients while helping them move on with an improved quality of life following an episode of care.

Dr. McCollum and his wife have four children. His personal interests include being active in Boy Scouts with his son and enjoying time in the Smokies hiking, kayaking, and camping.