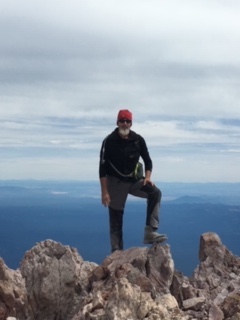 For many community members throughout our region, climbing a mountain isn’t just a metaphor. And some of those mountain climbers face greater obstacles than the heights. With literal and figurative mountains, the story of Asheville-area resident Doug Rouse, 57, is an inspiring one.

Three years ago, Doug trekked with a group to California to climb in the Cascade Range. Unfortunately, he had his foot totally collapse on the way up Mount Shasta only to summit the same mountain and its adjoining mountain peak, Shastina, after his recovery in 2019.

The injury on Mount Shasta had left Doug with a severe deformity in his ankle as well as chronic pain. So, he went to the experts at University Orthopedic Surgeons for another opinion after not finding the solutions he wanted for his goals. Today, he thanks foot and ankle specialist Christine M. Seaworth, M.D., for the ankle fusion treatment that has kept him moving—and climbing.

“We discussed different options for him to include reconstruction versus fusion of his hindfoot versus ankle fusion,” said Dr. Seaworth. “Due to his very high level of activity and extreme demands placed on his left ankle, we discussed that a fusion would be the best option for him.”

Dr. Seaworth performed an ankle and hindfoot fusion for Doug, and he was discharged from clinical care in February 2019 with good healing. He subsequently went on to return to mountaineering and climbing with good success of up to 10,000 feet.

“Basically, she did a fantastic job. Put a rod in, fused everything together, in October, well enough that the following June, I went back and summited Mount Shasta,” said Doug. “Fantastic job. No pain. She is awesome.”

Doug also used his determination to make a full recovery, sticking to physical therapy and even acupuncture to ensure his return to a full, active life. A modern Renaissance man, Doug has been an engineer, a taekwondo instructor, and a supervisor and still spends his time motorcycling, hiking, trout fishing, and backpacking.

“I do a lot of motorcycle riding, and that’s my gear shifting foot,” explained Doug. “So, Dr. Seaworth got enough movement in the foot that I can actually shift from first through sixth with no problem.”

This summer, he plans to backpack 78 miles through Glacier National Park. With his group, Doug has successfully backpacked the south and north rim of Yosemite and the Teton Crest Trail as well as climbed Grand Teton. “Without Dr. Seaworth, I’d have had to quit backpacking altogether,” he said. “Now, I’ve just been enjoying the heck out of it.”

Before each trip, Doug spends his free time training and going hiking for a few weeks. “I’ve been able to compensate because she told me what to expect, and we’ve been able to train around that getting ready for the climbs,” Doug added.

“She is a fantastic doctor. Her initial job, oh my God, it was fantastic. Everything stayed in line,” said Doug. “I went back for a checkup in the past couple months to get the other ankle looked at, and she said this ankle is staying right where it needs to be.”

As a fellowship-trained orthopedic foot and ankle surgeon, Dr. Seaworth has extensive expertise in common and complex injuries and conditions of the foot and ankle. If you’re working to overcome ankle, foot, or heel pain or dysfunction, Dr. Seaworth is available for consultation at our UT Medical Center and West Knoxville offices as well as in Sevierville. Call (865) 546-2663 for an appointment or request an appointment online.